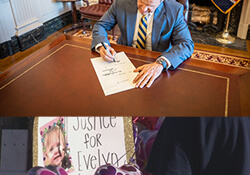 TN Gov. Bill Lee signed 'Evelyn's Law' on April 16 following unanimous approval by the state House and Senate. The bill is named for Evelyn Boswell, a Tennessee toddler whose remains were located in March 2020, leading to her mother being charged with murder.

Evelyn's Law is sponsored by Rep. John Crawford and Sen. Jon Lundberg and seeks to increase penalties for parents and/or guardians who do not report their children missing within 48 hours. The bill considers failure to report while demonstrating a reckless disregard for the safety of a minor to be a Class A misdemeanor. It carries a jail sentence of up to 11 months and 29 days, a fine $2,500, or both.